In collaboration with the Navy Cadet Association, we have created an exclusive blend. A part of the profit is donated to the association and the upcoming sea heroes.

We celebrate new and existing heroes

For centuries, the Danish navy and Danish naval officers have safeguarded Denmark’s security. To honor these numerous famous and unknown Danish sea heroes, we have created our exclusive blend, Naval Cadet.

A career as a navy officer with many months a year at sea means opting out of many other things. It’s one thing to be able to handle the crew on one of the Navy’s vessels, it’s another to be able to navigate long distance relationships, which for many naval officers a little too often end up in stormy weather.

A.H. Riise Royal Danish Navy Naval Cadet is made in collaboration with the cadets at the Navy Officers’ Acadamy. It is with pride that A.H. Riise donates a part of the profit and supports naval officers’ historical tradition of creating security for all of us at sea as well as on land. 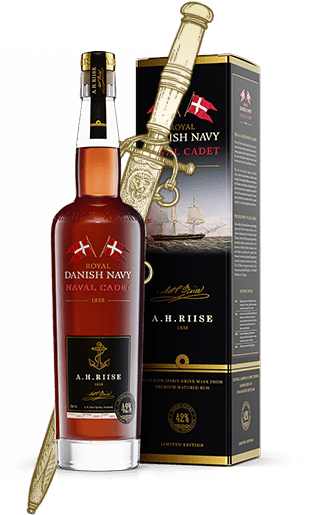 This blend is traditionally served at a gathering of the descendants of A.H.Riise once every five years.
READ MORE

With this blend we provide support together with the association Thin Blue Line to police officers who have been injured while carrying out their jobs.
READ MORE

Handpicked by our master distillers this blend has the perfect balance between tradition and strength.
READ MORE

The Frogman Corps is the Danish equivalent of the American Navy Seals. When buying a Navy Frogman you commemorate the Conventus Ranae association.
READ MORE

A subtle blend made from rum distillates – both young and old – in respect for naval traditions.
READ MORE

Being a part of the Naval history

In June 1838, the Danish Government officially granted Albert Heinrich Riise the exclusive right to establish a pharmacy on the island of Saint Thomas in the Danish West Indies. The rights included the production of alcohol-based medicines and tonics in his pharmacy. A. H. Riise soon began distilling rum and experimenting with flavours. The strong, sweet liquor became the start of a close connection to the Danish navy. Not only did A.H. Riise become the supplier of rum to the fleet in West India. Stored in old oak barrels, the golden drops were also shipped back to Copenhagen by the navy, where they were kept securely under navy guard. A.H. Riise continues to celebrate its connection with the Danish navy. Even today, officers who have successfully undergone their training celebrate their “passing out” with a couple of tots of A.H. Riise Royal Danish Navy.

The story of A.H. Riise

In June 1838, the Danish Government officially appointed Albert Heinrich Riise as the exclusive pharmacist for the caribbean island, Saint Thomas, part of the former Danish West Indies. This granted him monopoly status to produce alcohol in his pharmacy.

If you have an old bottle of A.H. Riise in your hand and compare it with a more recent bottle, you might wonder why what used to say ‘Rum’ is now ‘Superior Spirit Drink made from Premium Matured Rum’. What’s the difference? And does it matter to you?

The three faces of rum

West Indian rum and spirit drinks based on rum are traditionally produced in three different styles: Spanish, English and French.

A fine selection of spirits

AH. Riise Spirits owns a strong selection of brands with a long and rich history stretching back many centuries.

A smooth cream liqueur with a powerful, flavorsome, and sweet, exquisite taste of XO rum

A luxurious cream liqueur with a smooth and sweet taste of XO rum, caramel, and sea salt.

This blend is traditionally served at a gathering of the descendants of A.H.Riise once every five years.

Discover a new world of taste and aroma in this exclusive Non Plus Ultra Limited edition.

We have created something unique and rare and named it Non Plus Ultra which means ‘nothing further beyond’ in Latin.

Aging in carefully burned old Bourbon casks creates the ultimate blend. We named it Non Plus Ultra which means ‘nothing further beyond’ in Latin.

A fantastic sweet and gentle blend with the flavour of ripe fruit and warm spices. We named it Non Plus Ultra which means ‘nothing further beyond’ in Latin.

A.H. Riise Signature is simply a piece of unique art. Simply one of a kind.

A.H. Riise Platinum is created from small batch of unique rum. The heart of the blend is two Solera aged rums from aged casks.

A tribute blend not only to A.H. Riise, but also to the indigenous population of the islands as well as the Danish colonists.

Combine charred barrels with a mixture of spices and the result is the memorable Black Barrel.

Handpicked by our master distillers this blend has the perfect balance between tradition and strength.

The Frogman Corps is the Danish equivalent of the American Navy Seals. When buying a Navy Frogman you commemorate the Conventus Ranae association.

Hand-blended by our master distiller in respect to the strong naval traditions.

A tasteful Bitter with the taste of gentian root, quinine, bitter orange, coffee beans and a touch of vanilla.

A subtle blend made from rum distillates – both young and old – in respect for naval traditions.

It is said that rum from Albert Heinrich Riise was supplied to the naval fleet when they docked in the port of Charlotte Amalie.

This exceptional spirit drink, with its broad spectrum of aromas and subtleties of taste, offers a unique experience. It is truly a blend aimed at experienced aficionados.

With this blend we provide support together with the association Thin Blue Line to police officers who have been injured while carrying out their jobs.

With this blend every season will feel like Christmastime. Enjoy these precious drops when you are together with the ones you love.

It is within the port casks we find the reason for the immaculate and distinct port notes of this blend.

Ambre d’Or is matured in oak barrels that were originally the home of sweet wines, which contributes to the subtle, full and delicate tasting notes.

Our master blender has created a blend with the perfect edge and with a full-bodied taste experience. A true signature made from several carefully selected casks.

A collectors item. The third of 3 different Master blends with 3 different alcohol strengths with unique aromas and expressions.

A collectors item. The second of 3 different Master blends with 3 different alcohol strengths with unique aromas and expressions.

A collectors item. The first of 3 different Master blends with 3 different alcohol strengths with unique aromas and expressions.

A modern-day interpretation of the 1888 medal rum. A unique blend, made from several precious casks in the West Indies and Central America.

The launch of this Limited Edition blend is a celebration of the friendship between two unique men.

Handpicked by our master distiller

A tribute to sailors on the seven seas

The beginning of a rum adventure

Be the first to know

Get the latest news from all our brands A.H. Riise, Santos Dumont, Tranquebar and our Pharmacy line.

Sign up before 1/3-2023 and win an A.H. Riise Non Plus Ultra Black Edition. Read our competition rules here.